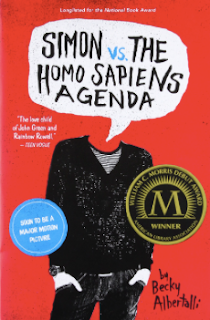 By Katelyn O.
Many people might not know this book but once you have read it, it changes the way you look at things.
It's about Simon being a hidden gay kid at school and emailing another person just like him, but they
don’t know who is who. Someone takes a picture of his emails because they want Simon to help them
ask out a girl that they like that is his friend. After he fails to do so, that man sends his emails to everyone
in the school; his secret lover has disappeared and his world turns upside down. He has to try and figure
out who has been sending him the emails before its too late. If you read the book it’s just like Woodward,
because we accept all kinds of different people. If this ever happens everyone would support you instead
of blackmailing you. I hope you all read this book, it has changed the way I live my life to be honest.
Have a great day!
Posted by Ms. Lee at 9:30 AM

Email ThisBlogThis!Share to TwitterShare to FacebookShare to Pinterest
Labels: Books