by Kendall  D.
The NBA finals this year is going to be one of the most intense year yet! Last year the Golden State Warriors won the finals with there star player Steph Curry. 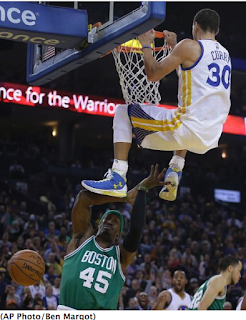 The teams that have the best chance of winning are the Golden State Warriors, Oklahoma City Thunder, Boston Celtics, Cleveland Cavaliers. I can not wait until the NBA  finals this Year. I wonder who will win it?