5 Interesting Fact about Fantastic Beasts and Where to Find Them

Fantastic Beasts is a movie were anything can happen. It's the sequel of a very fond movie of Harry Potter. It is a movie were the wizarding world is real. The love and hate between two main (Newt and Porpentina "Tina" Goldstein) and their beasts. The plot line and climax of the movie is amazing. It is a great movie and I think you will enjoy it.  Here are 5 facts you may find interesting about the film.


1.  J.K. Rowling wrote the book titled Fantastic Beasts And Where To Find Them under a fictitious pseudonym of the author Newt Scamander.  After achieving an astonishing success as a writer and author, J.K. Rowling debuted her screenwriting with movie.
Fantastic Beasts and Where to Find Them will certainly be a visual treat for the audience and the J.K. Rowling fans, as the movie will reveal about the history of Magizoology and it will also illuminate on 85 magical species around the world.


2. Highlights The Muggle World And An Important Character Named Newt Scamander     Newton Artemis Fido Scamander, a.k.a Newt Scamanderborn in 1897, is the protagonist of the story set in the backdrop of 1920 America. The movie will shift focus on the muggles this time who we know as the non-magical descendants. Muggles are people who do not have magical powers. Newt Scamander is a magizoologist and the grandfather of Rolf Scamander. 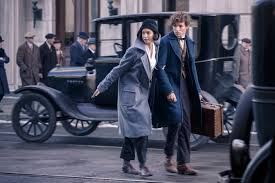 3. Newt Scamander Was An Order Of Merlin, mostly due to his work and contributions in the field of Magizoology, Newt Scamander earned the degree of Order of Merlin, Second Class, in the year 1979.


4. Fantastic Beasts and Where to Find Them was a textbook at Hogwarts School of Witchcraft and Wizardry, published in 1927.  It was included in the school curriculum.

Posted by Anonymous at 2:32 PM