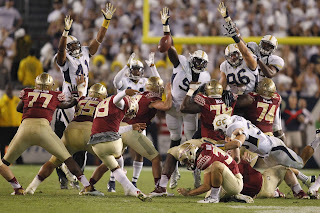 The Miracle on Techwood Drive
By: C.Z.Gardner

October 24, 2015, A day that will live in glory with Georgia Tech. It was homecoming night and Yellow Jacket alley was alive and bustling with tailgaters, fraternity brothers/sorority sisters and corn hole players.  Georgia Tech was facing off against Florida State, the ninth ranked team in the country and I had the same amount of doubt that comes with any Tech game. It seemed as if
everyone had the same doubt as I did but we all hoped for the best. We had lost five games in a row and morale was low, but what none of us knew, was that this game was going to be as unsuspecting as a blocked field goal attempt.  Literally. I blink and the next thing I knew it was the fourth quarter. The game had been very tight up until then. Both defenses had been playing phenomenally, but in the end it came down to the kicker. There were six seconds on the clock and FSU was attempting a fifty-six yard field goal. It felt like all of the Tech fans were holding their breath, hoping that the kicker would miss the kick. Meanwhile, the Tech student section erupted into a chorus of people chanting, “Block that kick! Block that kick!” The ball was snapped and after a few of the most tension filled moments of my life, I saw the ball on the ground, tumbling about as if it was alive. Lance Austin stared at the ball for what seemed like forever, and then he picked the ball up and ran as his teammates started blocking like their lives depended on it. Fifty, forty-five, forty, thirty-five, Lance bobbed and weaved as he made his way up the field in a mad rush. Thirty, twenty-five, twenty, fifteen, as he neared the fifteen yard line I held my breath as a Florida State player barely missed a tackle on him. Ten, five, four, three, two, one. Touchdown! Bobby Dodd stadium erupted into cheer as the whole thing set in. Georgia Tech had just upset the number nine team in the nation. We had just shattered a five game losing streak and had disrupted a twenty-eight game regular season win streak. It was a huge win for Georgia Tech. As a group of students were leaving they started shouting, “Miracle on Techwood Drive!” Yes, I thought to myself, it was a miracle indeed.